skip to main | skip to sidebar

Radiation treatment seems simple. Go into the office every day, 9:15, for fifteen minutes. Lie down on the table. The techs line up the tattooed dots with the laser grid. This big machine moves around to focus on the guts from six different angles, 20-30 seconds per. Done. Can't feel a thing.

Well, it's a little more complicated than that if one pays attention to the details. First, the machine is a linear particle accelerator that can generate gamma radiation or direct electron beams. No more radium, cobalt, whatever. Syntho radiation for the modern age. The business end of the machine is half of a very large horizontal tuning fork that can rotate around the plastic table that one lies on. See attached pictures. 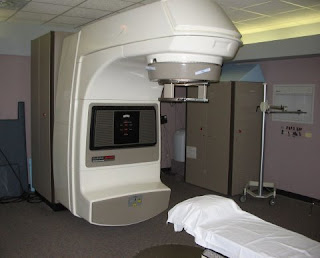 I get shot from six different angles: top, bottom, left, right (all gamma), and then left and right oblique angles (e-beam). For each of the shots, the techs fit a set of lead shields onto the exit face of the accelerator. The first four deep doses are gamma radiation, 18MeV. (That's eighteen million electron volts, which sounds like a l 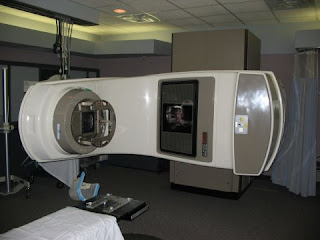 ot, and it is.) For these doses, the lead forms are huge, six to eight inches long (in the direction of the beam), the same wide, and two-plus inches thick. The inside surfaces are carefully machined to shape the beam just so, to match the doctor's plan from the simulation. Remember the simulation? Every week they take a set of X-ray films, but using the accelerator instead of and X-ray source, to see that the fields being irradiated match the doctor's drawings. The plates come out very overexposed but the shapes are clear. 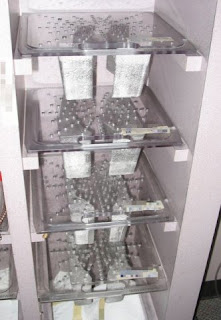 The last two doses are done with electron beams, also 18 MeV, rather than gamma (which they call "photon") radiation. Gamma rays, energetic little buggers, go right through, but e-beam doses are heavily attenuated by flesh, down to half strength at a depth of only two to three inches. These are used by design to shoot the shallow lymph nodes in the inguinal region, left and right. Just in case any cancer cells escaped into the lymphatic system, the doctor treats the lymph nodes.

Each of the doses follows a standard routine. The techs line up the dots with the laser-drawn grid. As a double-check, lights from the accelerator head are projected through the lead masks, and the techs check the alignment with the magic marker (Sharpie) lines they drew on the skin. When they are satisfied with the alignment, they leave the room and the computer closes the radiation door, which is about eight inches of steel and concrete. When the computer is satisfied with the door, it fires the accelerator. Typical doses are between twenty and forty seconds, during which I have to remain very still. Then the door opens, the techs come back, the machine rotates to its next position, and we start all over again. 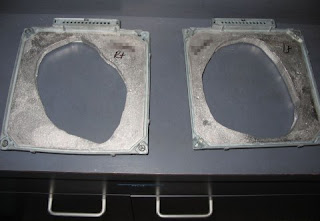 (I think the linear accelerator uses a target to generate its gamma-level radiation. Well, when I look it up, actually, the gamma range ends at 8MeV, so this is trans-gamma. Is there such a thing? But the radiation is generated by decelerating electrons against a target, so they're sort of X-rays. But given the energy levels, maybe they're Cerenkov radiation. Dunno. Wish I'd studied the physics a little harder. When the accelerator is operating in electron beam mode, I guess that the target is out of the way so that the electrons are emitted directly. What kind of barrier do they use to keep the vacuum in that is transparent to high speed electrons? Again, dunno.)

After the initial effects of the chemo, and before the radiation truck runs me over, I don't feel so bad. For several weeks in the middle, I work about half-time, from home of course, netted into the computers at work.
Posted by rblandau at 2:53 PM